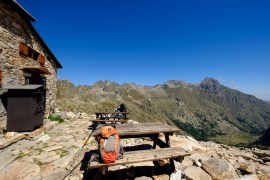 Ask a question about this product
Back to: Hotel


Description
RIFUGIO QUESTA
Emilio Questa Refuge (2388 m,) stands on a rocky outcrop on the north shore of the Lago delle Portette, in the centre of wide basin surrounded by the peaks of Portette, Claus and Prefouns. It lies in the municipality of Valdieri, in the Province of Cuneo. The Refuge overlooks the Valasco plain, in the middle of which stands the former royal hunting lodge, Monte Matto and the Cresta Savoia to the west.
Situated in the Parco Naturale delle Alpi Marittime, it makes an ideal places for outings looking for wildlife, you can see chamois, ibex, marmots and the elusive lammergeier. It is also well suited to climbing at all levels and hiking to the surrounding peaks. The Refuge is an old stone military barracks that has been used by the Ligurian section of the Club Alpino Italiano since 1925, it was partly rebuilt in 1937, added to in 1952 and1986.
The door opens onto the dining room, furnished in wood where traditional Piedmontese meals can be taken, or just something from the bar and a rest. The sleeping accommodation is comprised of three dormitories sleeping 6, 14 and 10 on the first floor and groun floor.

HOW TO ARRIVE
By car: If you are coming from the north follow the A6 Torino-Savona motorway to the Fossano exit, then take the SS 231 to Cuneo, from there the SS 20 to Borgo S. Dalmazzo, then drive up the Gesso valley through Valdieri and on to Terme di Valdieri where you can park.
If you are coming on the motorway from the south follow the A6 to the Mondovì exit and from there follow signs for Cuneo then Borgo S. Dalmazzo.
If you are coming from Nice or Ventimiglia The Roya Valley is best. Follow signs for colle di Tenda and the SS 20 to Borgo S. Dalmazzo.
By public transport: By train to Cuneo or Borgo S. Dalmazzo (timetable: Trenitalia ), then by bus to Terme di Valdieri (timetable:Autolinee Nuova Benese, tel. +39 0171 692929).
Flying: Turin international airport is 100 km away, Nice international airport is 130 km, Cuneo airport is 30km away (tel. +39 0172 374374) but offers a limited number of flights.

DOGS: admitted out of the rooms