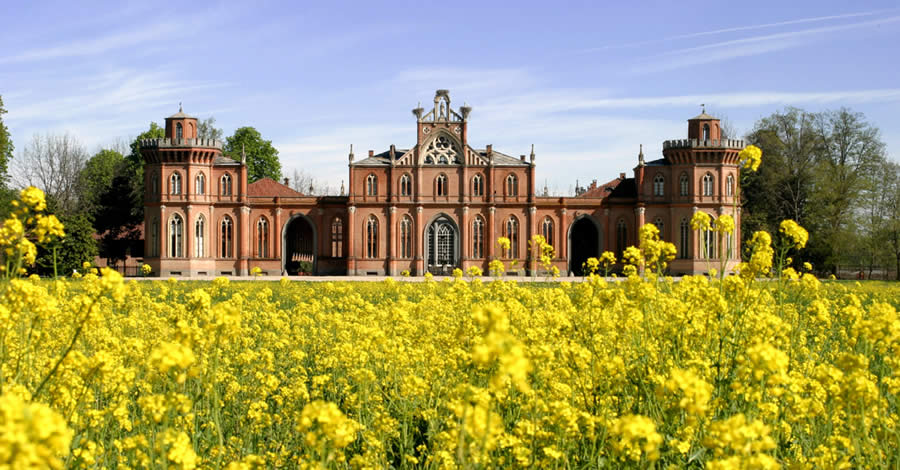 Here you can find a list of museums in the Monregalese Valleys and Tanaro. You will find ethnographic, natural history museums, and typical local crafts museums, like the house Galimberti Museum or the Museo Ferroviario Piemontese of Savigliano.

The Palazzo Osasco (Osasco Palace), which used to be the home and office of Duccio Galimberti, is located on the western side of piazza Galimberti (Galimberti square). He was a lawyer and the son of Tancredi Galimberti and of the English poet Alice Schanzer. Tancredi Galimberti had been the Postmaster General with Giovanni Giolitti, who then became a senator for the fascist party. In the flat, now owned by the Council, Galimberti organized the first nucleus of the band Italia Libera (Free Italy) (similar to the one that Giorgio Bocca set up in Valle di Grana - Grana Valley - with Benedetto Dalmastro and other comrades). The flat can be visited on request, and houses a rich picture gallery, with paintings by Piedmont painters, and several art objects. The most valuable section, however, is the Archives of Duccio Galimberti, who was killed by the fascists in 1944 and consequently awarded a medal for Partisan valour

This museum was set up in the former convent of the Frati di S. Francesco (St. Francis Brothers), having a Romanesque-Gothic church from the 1400s and a cloister from the 1500s. The museum tour breaks down into three sections: archaeological, artistic and ethnographic. The first present pre-historical, pre-Roman and mean evil materials from all over the Cuneo province. The arts section accommodates a remarkable fresco from the 1300s depicting the Madonna with Child and other paintings from the 1600s to the 1900s. The section dedicated to folklore and popular art presents the costumes typical of the Alpine valleys, objects commonly used and locally crafted furniture, 19th-century signs, equipment for farming and weaving and a unique collection of Lenci dolls made in the 1930s.

The building, known as Monte di Pietà, was built by the local architect Pio Eula in 1786 for the Bruno di Samone family that, in the person of count Francesco Bernardino, had become part of the élite class of Cuneo, concerned with the government of the city.  The building stands on the foundations of an ancient medieval structure, characterized by the presence of a late 16th century mansion annexed to a large open area that could be used as a garden.

The Diocesan Museum is situated on the ground floor of the former Seminary. The exhibition begins with the images of the thirty-three parish churches that the Diocese is composed of, as well as with a photo video that describes its history from its foundation, in 1592, and illustrates the works of its bishops. The museum collection includes sacred art works that belonged to the three Brotherhoods that have operated in Fossano for centuries: the Battuti Rossi Brotherhood, which helped sick people; the Battuti Bianchi Brotherhood, which worked to free people from slavery; the Battuti Neri Brotherhood, which gave assistance to people sentenced to death. The collection also included the decorations and the sacred objects of the St Joseph church in Fossano, which have been moved to this Museum.

It was founded in the early 20th century in the 18th-century Lucerna di Rorà building by request of Giuseppe Assandria and Giovanni Vacchetta, who singled out the site of the Roman Augusta Bagiennorum. They led a series of archaeological investigations between 1892 and 1925 that brought the main public and private buildings to life. The museum exhibit reflects the criteria of 19th -century museum studies and hosts finds from the Roman city and a small section dedicated to local history. The marble doorposts of two of the three doors to the Augusta Bagiennorum theatre are found inside, along with various architectural elements (frames, capitals) and items of common use, ornamental elements, trousseaus from the southern burial grounds (1st century A.D.). A group of objects found in 1959 in the area surrounding the Roman city leads to the daily life in Piemonte during the same period.

This museum is located within the house where Cardinal Michele Pellegrino used to live, and was opened in 2003. Two specially-restored rooms exhibit his mitres, his pastoral, his zucchetto (the skull cap worn by Catholic cardinals), his cassock and rocket, his work desk and other daily belongings.
The ‘House–Museum’ aims to become a centre for documentation, grouping together everything written by the Cardinal and whatever has been written about him.

Piozzo, on the Langa Vinatera, is a town steeped in history and tradition, boasting ancient origins as is demonstrated by the thirteen churches, the castle and other artistically significant buildings. The Parrocchiale di Santo Stefano houses a museum which boasts in its collections paintings, silver goblets, missals and other liturgical artifacts dating back to the 17th and 18th centuries. Furthermore it includes some sculptures and paintings by the Gagini of Genoa as well as 15th-century paintings and a marble altar by Giuseppe Gagini.

An ancient home belonging to Galeazzo Cavassa and to his son, Francesco, both general deputies of the Marquis di Saluzzo, it became a museum at the end of the 19th century when the Marquis Emanuele Tapparelli D’Azeglio acquired it, carefully restored it, then later donated it to the city along with all of its furnishings and art work intact. Today, it is a city museum consisting of 15 rooms with painted lacunar ceilings in wood and decorated walls. The furniture and furnishings are from the Renaissance period and from the 19th century and are still arranged as Tapparelli wanted. The main entrance, in white marble, carries the engraved motto of the Cavassa: “Droit quoi quit soit” (Justice Whatever It May Be) and a chub fish from the river – the family’s symbol - above it. The interior gallery is enriched with three double-arched windows in the late Gothic style and a balcony in wood with grisaille frescos depicting the “Fatiche di Ercole” (“The Labors of Hercules”) by Hans Clemer done between 1506 and 1511.

The park extends onto the hill at the sides of a path lined with acacia trees leading to the clearing in front of the villa, which is marked by tall horse-chestnut trees and old oak tree. The park was designed as a Renaissance garden and it includes ornamental trees, vineyards and fruit trees, most of all apple trees. A well covered with coloured ceramic shingles rises in front of the porch at the entrance of the building. On the eastern part, the large panoramic terrace overlooks the surrounding landscape.

The Casa Museo di Silvio Pellico (Silvio Pellico house-museum) in Saluzzo holds a diverse collection of materials, created with the progressive enrichment of the original nucleus obtained in 1858 from the writer’s sister, Giuseppina.
The reproduction of the title pages relating to the treatise “Dei doveri degli uomini” (Duties of man), the theatrical writings, letters and poetry characterises the reception ambience of the ground floor, where visitors can consult a cd-rom containing the digitalisation of all the manuscripts of the Saluzzo collection (over 1250 pages) with their transcription and watch a dvd based on material from Rai Teche. Particular attention was paid to the requirements of handicapped persons, through important descriptive signboards designed by the Accademia Albertina.
The personal objects are located in the room decorated in the neoclassical style of the first floor, in the study-style of a writer between 1830 and 1850, mounted by integrating the only piece of furniture actually belonging to Silvio Pellico, a scriptorium, with items of furniture consistent from a typological and chronological point of view. The adjoining room offers visitors evidence of the period of incarceration and documents associated with the writer-patriot’s celebratory phase. On one wall, the large painting of Pellico and Maroncelli leaving the San Michele prison in Venice for the Spielberg, which Carlo Felice Biscarra produced in 1865, interrupts the extensive sequence of reproductions of title pages of editions of “Le Mie Prigioni” (My Prisons) that bears witness to the extraordinary diffusion of the work. The manuscripts are numerous and valuable, with some exhibited in facsimile form.
Giuseppina Pellico’s donation includes 29 translations of her brother’s works, given evidence to a publishing success not found with any other nineteenth-century Italian author, the daguerreotype with his portrait created by Meisser and Stenzel in 1841 and the famous glasses very much linked with the image of the personality.

The gallery preserves the forty seven works of artist Carlo Sismonda, both in Racconigi in 1948 and an honorary citizen of Torre S. Giorgio. A large number of his works are found in the museum and in private collections throughout the world, with subjects ranging from figurative paintings to landscapes and religious themes.

SAVIGLIANO - Gipsoteca Calandra
Via San Francesco, 17
Telefono: +39.0172.712982
www.comune.savigliano.cn.it   - This email address is being protected from spambots. You need JavaScript enabled to view it.

This museum is located inside the ancient St Francis convent, which is a square two-storey XVII century building. On the ground floor, we can find a room where the history of urban development of Savigliano is described: from the first archaeological finds to modern transformations. We can also see the Gipsoteca Davide Calandra (Davide Calandra Collection of plaster casts), where casts, sketches, plaster and terracotta moulds (including the plaster cast of the frieze of the Montecitorio Hall in Roma - the Chamber of Deputies-) are housed. On the upper floor is housed the municipal collection of works of art, which date back to between the XVI and the XVIII century. An entire section has been devoted to the paintings and the sculptures that Attilio Bonino donated to the museum. This section has been laid out so as to evoke a collector’s home, with small rooms where the works of art are exhibited close to each other.

One of Piedmont’s first railways was opened in Savigliano in 1853, and very shortly afterwards, a plant for the construction of rolling stock was built nearby. That same company was to become one of the world’s leaders in the development of high speed trains. All this has led to the creation of an interesting living museum in which visitors can see locomotives, such as the “1701”, built in 1873, in action, unlike in other museums of this type. The museum opened in 2002 and houses rolling stock and vintage carriages, models and documents concerning transport history.

The museum, opened in 1994 to mark the centenary of the foundation of the Istituto di Suore Carmelitane di S. Teresa in Torino, is located in Marene’s nursery school and houses over 130 findings and mementoes, all recorded and described in a specially-created archive, including a small statue representing Saint Joseph. The museum, besides being a destination for pilgrimage and meditation, is also a key place to understand the significance of religion in the history of the Marene community.