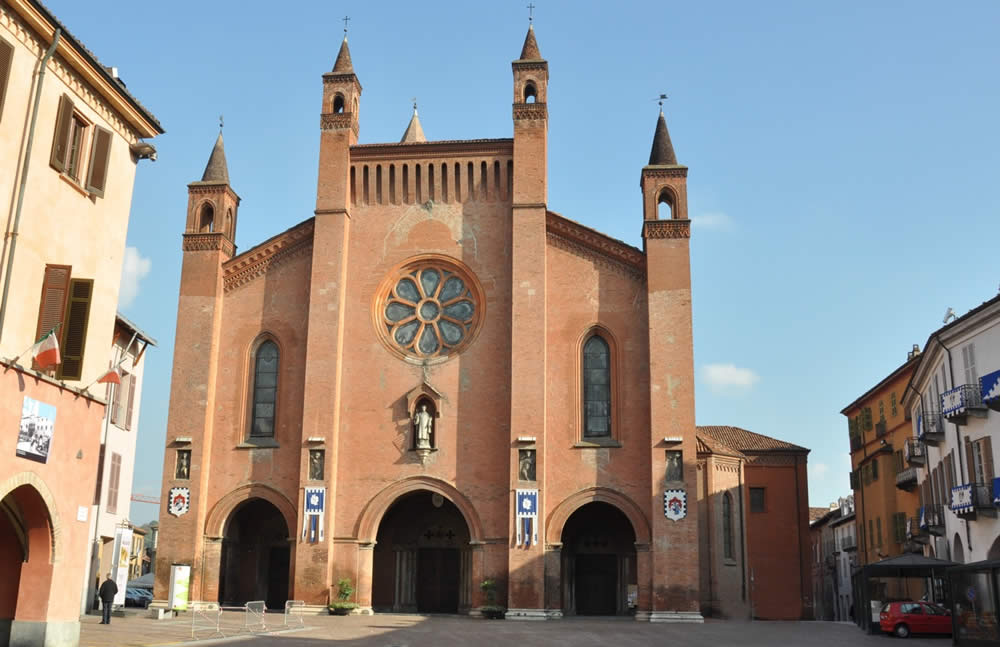 ALBA
Hills, castles, wines, truffles are the main characteristic of Langa and Roero. Here every hill has got its castle or its tower; its farms with vineyards and hazels, in a magic landscape,

where witches and wizards animate life of all the days between the autumn fogs and the spring flowered air; the better season to see these Lands. Walking in Alba, once a Roman city, along via Maestra, is really pleasant: fulcrum of the medieval village is square Risorgimento, where each month of October occurs the “Palio degli Asini”, where you can see the medieval cathedral, dedicated to St. Lorenzo, the municipal palace, the arcades with the dominant position of three of the one hundred towers, that constituted the ancient, riche and aristocratic Alba. Then we meet gothic church of S. Domenico, baroque church of the Maddalena, where rests of the corpse of the blessed Margherita of Savoy, and still the “loggia” of merchants, St. John, the social Theatre.
The town is very active and lively, thanks to commercial activities joined to the agricultural region and to the important industries such as the very famous Ferrero, Miroglio Vestebene, Mondo Rubber.

BRA E CHERASCO
In the Roero we find two towns at few kilometres of distance: Bra and Cherasco. The first one is a rich city of baroque monuments, between which we remind the church of St. Andrea (front of Bernini and inside of Guarini), the Saint Trinity and Saint Chiara. Interesting is museum Craveri of natural history and the medieval palace Traversa. We recall also the sanctuary of the Santa Maria dei Fiori, where each year in December flowers a bush for a miracle.
Cherasco is a small jewel of Savoy architecture, with Triumphal arch and residences of aristocracy tied to Savoy family, as palace Salmatoris, where Carlo Emanuele IV had to sign the armistice imposed by Napoleon; a curious municipal tower; the Romanesque church of St. Peter; the sanctuary of S. Mary of People with XVIII century frescoes by Taricco, the castle of Visconti family gives to the town a particular charm, enriched on Sundays by local markets.