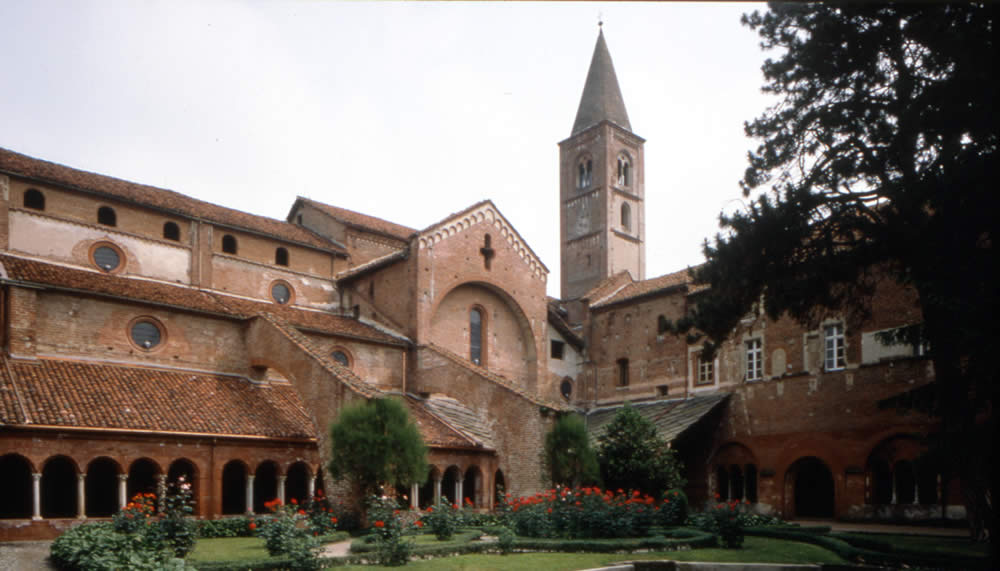 Between 1135 and 1138 some monks from the Abbazia ligure di Tigliet’ (ligurian Abbey of Tiglieto), founded a church and, straight afterwards, their headquarters. It was built according to the wishes of the Marquis of Saluzzo, on an uncultivated piece of land called “la staffarla”. Following the Cistercian rule, the monks built a small “city” that comprises the church, the cloister, the refectory, the lay brothers’ building, the guest quarters, the covered market and the farmhouses. From the XV century onwards, however, the community progressively declined, so much so that in 1750 the Holy See declared the autonomous abbey’s role to be over, and the complex was given to the Order of St Maurice. The church has a nave and two aisles, and is a splendid example of Romanesque-Gothic style. The inside is austere, the cross vault and the pillars, all different from one another, are decorated with alternating colours, which go from red to grey. Above the high altar, visitors can admire a painted and golden XI century wooden polyptych, by Pascale Oddone.

REVELLO – Chiesa Collegiata
Via Vittorio Emanuele III, 9
Tel. +39.0175.257128
The Church “Collegiata”, built in the late fifteenth century, rises at the western end of the historic centre of Revello. The style is late –gothic with elegant shapes, although evident are the Romanic scheme in the Facade. The whole structure is linear and solemn, including the mighty eight-storey bell tower, with unfinished windows and without spire.

REVELLO – Cappella Marchionale
Piazza Denina, 4 - Tel: +39 340 5346767
This email address is being protected from spambots. You need JavaScript enabled to view it. – www.comune.revello.cn.it – www.revello-storia-arte-asar.it

The Marquis Chapel is located within what remains of the ancient Marquis Palace. Of that stately mason, rebuilt several times and finally almost demolished in 1810, the loggia of the Hall is still a living witness.
In ‘500 the chapel was decorated with portraits of the family of the Marquis Ludovico II and histories of S. Maragerita and S. Luigi’s life.

The Sanctuary of Our lady of Mercy in Valmala is the main sanctuary in the diocese of Saluzzo. The complex consists of a large church facing the village, with bell tower and a large arcade. It has been built on the site where the Virgin appeared to four little girl shepherds.